when i read the recent news of the hostage beheadings, deep sorrow overwhelmed me. it was early in the morning, and i turned to my oldest son, josh, with tears in my eyes. i told him i felt so badly and wanted to do something, but didn’t know what that could be. we talked a bit and decided that the very least we could do that day was to not complain about anything. a tiny, tiny thing…..but something to remind us all day of what was important.

as it turned out, josh joined me for an art meeting i had with the wylde women gallery director. we talked of the new show we were gearing up to have and what we would put in it. i said i had some doors i could bring to “funk up the place.” we talked of splattering paint on them and just being fun with them. but then josh turned to me and suggested i do something with those doors to express the feelings i was having about the beheadings. as soon as he said it, i knew i had to do just that. i was so full of these feelings and they needed to tumble out somewhere. 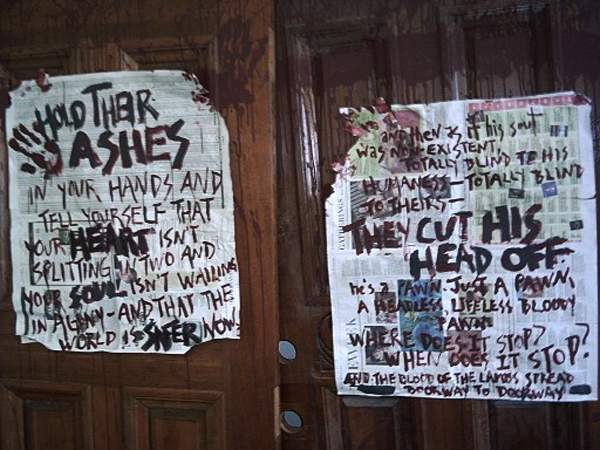 josh and i did continue our “not complaining” campaign for the rest of the nite. and as it turned out, it was an extremely significant and difficult nite for josh. as we sat next to each other in sadness, we looked at each other and remembered our pact. no complaints. and we agreed, it truly put everything in perspective for us that nite.

as i sat the next evening watching my three sons work on their truck, i again was filled with the emotions of the news. my sons, 18, 16, and 12, all doing something all brothers should be doing…..working together on something they loved. so much was moving inside of me.

i scrambled to get some paper and a pen. things were coming and i wanted to let them out. two bone sighs were born as i sat there next to my sons tinkering.

i insisted that i get a newspaper to paint on. the bone sighs that had just been born were to be painted on newspaper and taped to the doors. i knew it. the doors would be splattered to look bloody. i knew it’s what i had to do. it was 10:40 at nite and i found myself in the grocery store buying a newspaper. 11:30 rolled around to find me madly painting my latest bone sighs on the newspaper. i was filled with this. i had to do it. NOW.

i wanted so much to cry out. to wail. to tell these people they mattered. to honor the dead. to honor the human spirit that i must believe in. that i will not let go of. i had to do it.

the next morning found me early in the back yard splattering the doors and releasing so much emotion inside of myself. art truly is therapy.

noah and zakk, two of my sons, helped me set up the doors in the gallery soon after that. they understood what they were about and truly were pleased to help set them up.

it didn’t take long before someone came along and was offended. he was so offended that he turned them to the wall so no one else could see them. after that, tammy called to tell me that this same man had callled her irate and demanding that she remove the doors. she refused and he contacted the owner of the building.

tammy and i discussed it. i told her that i would remove the doors in a heartbeat if she asked me to. tammy is the only one i would have done that for. she had encouraged and supported me in being true to myself, and i would do what i could to keep that from causing her trouble. i’ll never forget what she said. without hesitation, she said “terri, some things are more important, and this is one of them. the doors stay.”

i was in total agreement. the doors were to honor those who died. if we took them down because one person misunderstood their meaning, then the doors would only be a dishonoring to the human spirit. the doors stayed.

soon after that we were asked to leave. it was the typical shallow go around. tammy and i wanted to meet and talk it over with the people who were upset. i was excited at that thought. i thought of how it was like a microcosm of the world. we were having a conflict, let’s communicate, let’s see if we can hear each other. what a great chance to see if we could work together as humans. no one had time for that. there was only one thing be done, remove the doors. when i offered to meet, and to post an explanation by my piece, i was told the doors needed to be removed. and when i refused to remove them i was told that i had an uncooperative spirit. no one wanted an uproar. “we are here to make money.”

perhaps it was more of a microcosm then i wanted to admit.

and so, we closed. the wylde women gallery that was created to make a space for everyone, the gallery that never turned one person down, that encouraged all to participate and enjoy, was censored and closed.

we packed up, cleaned up, and loaded the trucks. as i turned for a last goodbye, i noticed some ashes that had fallen to the floor. i thought how fitting it was that they were there. “this is no place for agony,” i was told. and i thought of how we can close the doors, even hide the doors away…..but there are always ashes that linger behind.